Chef and Restaurateur Michael Schwartz began his career in Philadelphia, and earned his culinary chops in kitchens from Los Angeles to New York City, until settling in Miami in the early 1990s. An icon of the South Florida culinary scene, he is the owner of The Genuine Hospitality Group, which first opened in 2007 and now encompasses fine dining establishments in Florida, Georgia and Ohio. Honoured with the prestigious James Beard Foundation Award for Best Chef: South in 2010, Chef Schwartz is commitment to community and responsible sourcing. His style combines a laid-back, bistro atmosphere and straightforward food emphasizing fresh, local ingredients.

A classic revisited, for Krug x Onion he created Sweet Onion Empanadas. "It is our reinterpretation of the Chilean "Pequenes".
The main component of the filling is caramelized onions served in a baked crust made with flour and embellished with soft queso fresco and our house-made chimi spice. Garnished with paprika-tajin aioli, it will pair amazingly with the complexity and freshness of Krug Grande Cuvée 169ème Édition.” 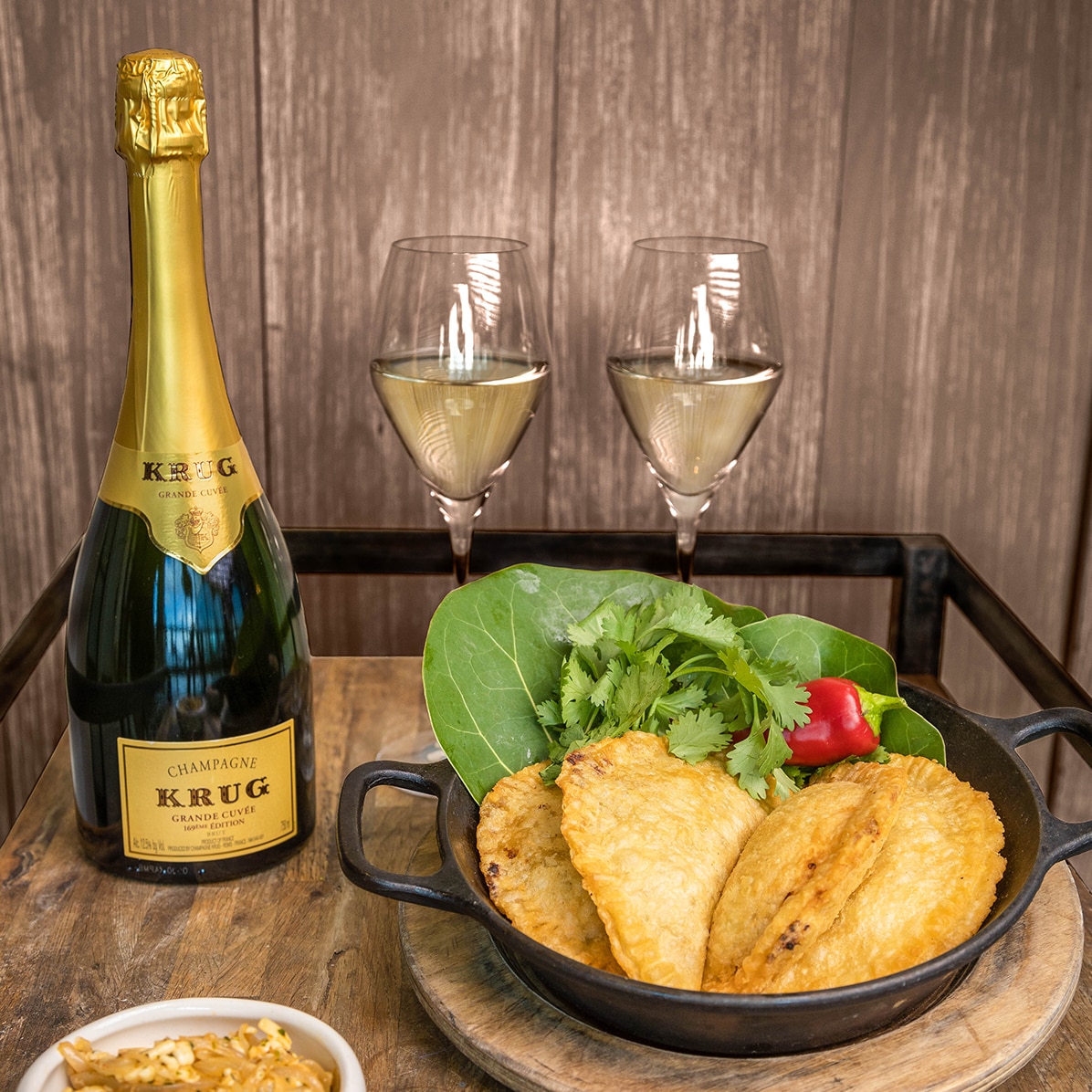 3 large yellow onions, cut in half lengthwise and sliced thinly

Heat the grapeseed oil in a large saucepan over medium heat.

Add the onions, sugar and salt.

Cook, stirring occasionally for 30 minutes or until the onions are lightly caramelized.

Remove from the heat and add the paprika, cumin, oregano, cilantro and hot sauce.

Taste and adjust seasoning, set aside to cool.

Once the filling is cooled fold in the shredded chihuahua cheese.

In a medium saucepan, cover the yuca with water and bring to a boil. Let boil for 15-20 minutes until the yuca is very tender.

Drain well and reserve the pot the yuca was cooked in it will be used in the next step.

Return the yuca cooking pot to the stove over medium heat and add the drained yuca back to the pot and slightly stirring for 2 minutes to dry out the yuca.

Pass the dry boiled yuca thru a ricer or food mill and season with the salt.

Work the salt into the yuca and start kneading the mixture into a smooth dough similar to a pasta dough. Wrap the dough and let temper at room temperature until ready to use.

Whisk all ingredients in a bowl.

Once completely combined, cover with plastic wrap and place in the fridge to allow flavors to combine.

Use are large pot or dutch oven filled two thirds of the way with vegetable oil to deep fry the empanadas.

While the oil is warming divide the dough into 12 equal portions. Roll the dough into a ball, flatten it and roll it with a rolling pin until you have a 5-inch circle.

Fill with 2 tablespoons of the cooked onion mixture. Fold over to make a half-moon shape and seal the edges using a fork.

Remove the empanadas from the oil to transfer to a paper towel lined plate to soak up oil from both sides.

Season with kosher salt and serve with a dollap of smoked paprika aioli and a fresh lime wedge to squeeze.

The Most Generous Expression of Champagne